5 Tips to Take Command of Your iPhone

Want a shortcut to the Notifications/Today screens, the Magnifier tool, Spotlight Search or other favorite iPhone functions?
Check out the iPhone’s Back Tap setting. Credit…Apple

Here are a few quick tips for enhancing the iPhone experience. Next week’s Tech Tip column will round up a few helpful hints for the Android faithful.

The Control Center — that handy panel of often-used settings summoned with a finger swipe — first appeared back in 2013 and got more useful when Apple began to let users add their preferred buttons a few years later. If you haven’t tinkered with your Control Center to add the features and functions you use the most, just open the Settings icon on the home screen, scroll down to Control Center and give it a tap.

As shown in the Settings screen on the left, you can choose the apps you
want to see when you open the iPhone’s Control Center.
Credit…Apple

From the list on the next screen, choose the icons for the apps and settings you want to live in your Control Center. While tools like the Flashlight are typically there by default, you can remove those you never use and add icons for apps you want, like the Magnifier, the QR Code scanner or even the Shazam music recognition feature. To rearrange the order of the icons on the screen, drag them up and down the list before you close the Settings app.

2. Assign a Back Tap Action

Wouldn’t it be great if you had yet another way to interact with your device along with screen swipes and voice commands? If you have at least an iPhone 8 running iOS 14 or later, you can use the Back Tap feature to have your iPhone perform a specific action when you give it quick taps on the back. 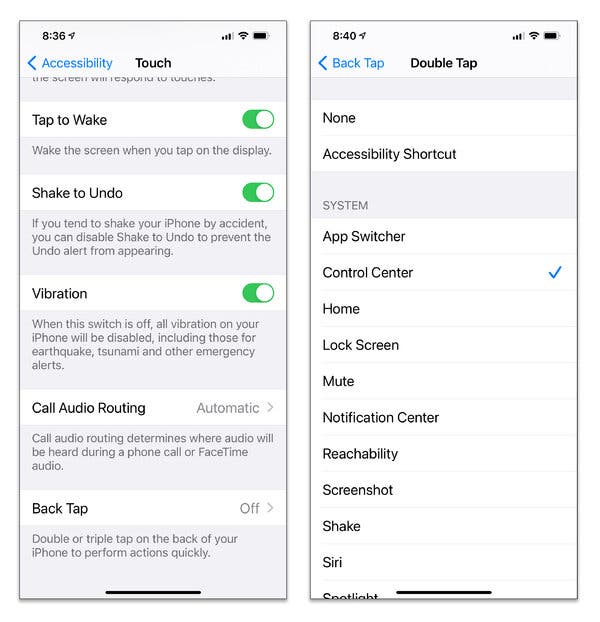 The Back Tap controls are at the bottom of the Accessibility/Touch settings screen, left.
Once you enable the feature, you can choose an action for the iPhone to
take when you tap the back of the device.
Credit…Apple

To set it up, open the Settings, select Accessibility and then Touch, and scroll down to Back Tap. Once you select Back Tap, select either Double or Triple Tap and choose an action on the next screen, like opening the Spotlight search app or the Control Center or running a Shortcut you’ve set up with Apple’s Shortcuts app. You can assign two separate tasks to the Double Tap and Triple Tap functions — and Back Tap should work even if your iPhone is in a case.

3. Choose Your Mail and Browser Apps

Tired of the iPhone always opening the Safari browser instead of your favored DuckDuckGo when you tap a link, or firing up Apple’s Mail program instead of the Gmail app when you select an email address from your Contacts list? If your iPhone is running iOS 14 or later, you can choose the apps you want as your default programs. 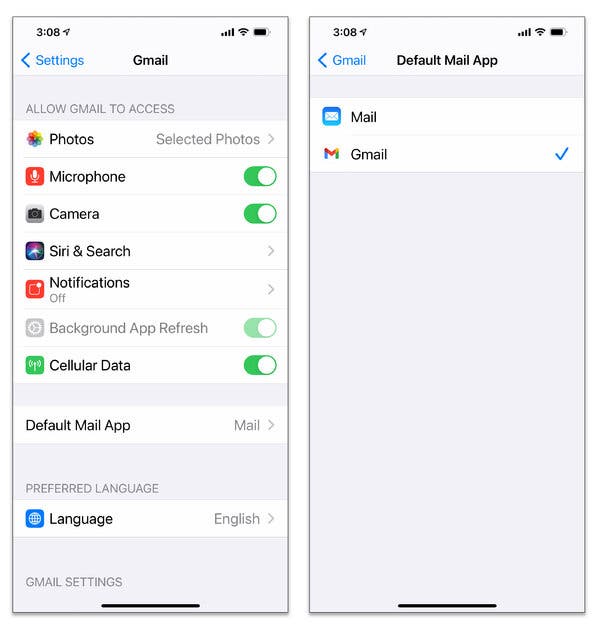 To assign a new default app, go to the setting screen of the app you want to use, tap
“Default Mail (or Browser) App” and confirm your
selection on the next screen.
Credit…Apple

To make it happen, tell Siri to “open the settings for Gmail” or whichever app you actually want to use. You can also tap open the Settings icon on the home screen, scroll to the name of the app and select it to get to its settings. Tap the Default Browser App or Default Mail App line and on the next screen, and select your preferred program.

4. Direct Your Response in Messages

Want to respond to a specific post in a Messages chat or get someone’s attention in a group conversation, just as you can on some social media platforms? You can do both.

Press and hold a message in a conversation and select Reply from the menu
to respond to that post. As shown on the right, you can also mention someone
in a conversation to send him or her a notification.
Credit…Apple

To reply to a certain message in either a one-on-one or group chat where everyone is using the Messages app, press your finger on that message until a menu appears. Select Reply, enter your response and tap the blue Send arrow. To tag someone in a conversation so he or she gets a notification, put the @ symbol in front of the name or just type the name and select it when it pops up onscreen from your Contacts.

5. Get the Siri You Want

Apple’s Siri voice assistant, celebrating a decade on the iPhone this October, has been losing ground in knowledge and usefulness to Amazon’s Alexa and the Google Assistant in recent years. To boost Siri’s powers, Apple added more skills in iOS 14. And with iOS 14.5, it now includes a more diverse set of voices. 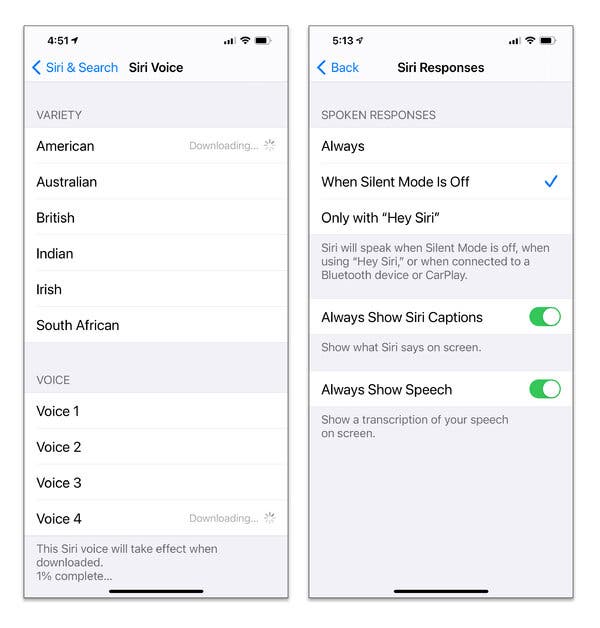 In the iOS 14.5 update, Apple added a more diverse set of synthetic voices for Siri to use.
Elsewhere in the settings, you can choose to display your conversations as captions.
Credit…Apple

To change how and when Siri sounds, open the Settings icon on the home screen, select Siri & Search and make your selections. You can also opt to display your conversations on the screen by tapping Siri Responses and turning on “Always Show Siri Captions” and “Always Show Speech” to make sure you see the last word, too.

NSN is now SCG Together; offering our Customers and Partners a supercharged service provider that is so much more than the sum of its parts.
Discover how you can Be More with SCG…